1982 is a FREE retro inspired blasta-thon that will test your gaming skills to the max.

Each power-up has 2 uses, one when collected by the players ship and the other when shot and destroyed.
If you catch a power-up before it hits the ground then it's effect is increased. (ie. More energy is regained or lasers, rockets or shield last longer.) A successful catch is indicated by a heart.

The 4 types and uses are as follows:

4. Shield Power-ups (cyan)
Kill - creates a temporary portal that destroys all enemy bullets
Catch or Collect - grants the player a temporary shield protecting against all impacts

General
Each enemy kill is worth 1 pt x score multiplier.
The Score Multiplier is increased by filling the kill gauge on the left of the screen. To do this string a lot of kills together quickly. Failing to kill anything causes the gauge to drop.

Abductions...of Man & Multipliers
When a certain number of enemies reach the ground a Man will be abducted by a yellow saucer. As well as abducting Man the saucer takes x3 from your multiplier.

Kill the saucer and allow Man to fall safely to the ground and your x3 multiplier is returned.

The number of enemies reaching the ground needed to trigger an abduction reduces as your multiplier increases. High multipliers are hard to defend.

Coins
Many in game actions such as killing certain enemies trigger a coin drop. Pick up the coins for extra points (5pts x multi), catch them for a further bonus (10pts x multi). Caught coins are indicated by a heart.

Bonuses
Complete any of these in game actions to trigger a bonus coin drop...


If you like 1982 then checkout this other game made by Binary Zoo:
http://store.steampowered.com/app/338000/Echoes/ 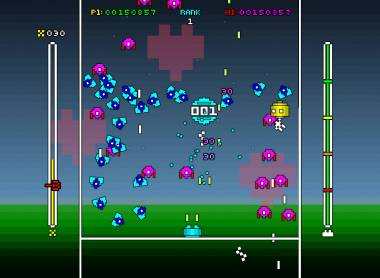 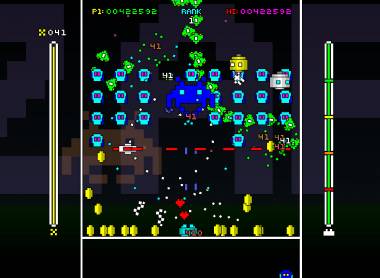